Phenotypic diversity in sexually reproducing organisms arises from the exchange of genetic material during the formation of gametes, or germ cells. In a process called meiotic recombination, the paternal and maternal chromosomes are replicated, pair, and exchange parts of their DNA by forming double-strand breaks, which are later repaired. The organization of the double-strand break machinery that carries out this essential process has long been a mystery. Franz Klein and his team at the Max Perutz Labs show, in work published in Cell, that the machinery is localized at discrete sites along the chromosome axis and that its mis-localization leads to defective recombination. 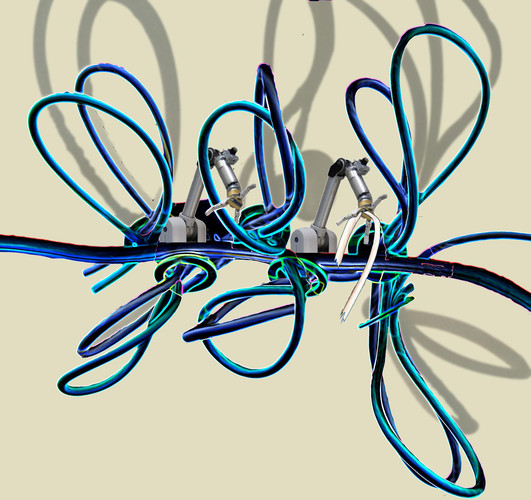 Glimpse into the nano-world - section of a chromosome with “DNA-break machines". Loops of sister chromatids (blue and turquoise) are linked and held in shape by ring-shaped molecules. The machines are anchored between the DNA-loops at the axis of the chromosome. One of the two machines holds on to a piece of DNA it just has broken.

During the development of gametes, such as egg and sperm cells in humans, chromosomes are broken and rearranged at many positions. Using state of the art technology, the research group of Franz Klein, professor for genetics at the Max F. Perutz Laboratories of the University of Vienna, has analyzed this process at high resolution. The surprising observations regarding the mechanism of meiosis are now published in the scientific top-journal Cell.

Without meiosis there would be no sexual reproduction, as germ cells have to be generated in this specialized cell division. Meiosis results in daughter cells containing a single, complete set of chromosomes, while body cells contain two sets. During fertilization, when sperm and egg fuse, their sets of chromosomes are combined to form a diploid embryo to close the cycle.

Franz Klein and his research team have analyzed components of the protein machinery, which initiates recombination by DNA-breakage. They created a high resolution map of the chromosomes and marked the interaction sites with those proteins. “Thanks to DNA microarray-technology, we get a resolution in the nanometer range, with insights unimaginable before.” says Klein. The researchers were surprised to find the DNA-breaking machine tightly associated with chromosomal axis regions, instead of being soluble - an observation with far reaching consequences.

One of the many riddles in meiosis was how breaks on chromosomes impede the occurrence of other breaks in their vicinity. Earlier research had shown that each individual DNA-breakage complex only works a single time. “As we now know that these machines are anchored, we understand why there is preferentially a single break per region. The locally bound machine has fired and other machines can’t get there as they are anchored to other chromosomal regions”, explains Klein.

When chromosomes are out of shape

Healthy chromosomes can form DNA loops, which are, in meiosis, connected by a protein axis. Defective genes can cause chromosomes to lose this shape. “No one could understand why the shape of chromosomes influences the function of the DNA-break machines. Now we know that these machines have to anchor between loops on the chromosome axis. If their loop-environment changes they anchor in different regions or lose functionality altogether”, says Klein.

Sister chromosomes are connected like Siamese twins along the chromosome axis, where the DNA-break machines are anchored. It was very mysterious, how the sister chromosome is prevented to take part in the repair of DNA breaks during meiosis, despite being so close to the damage. A special feature of meiosis is the formation of a zone along the chromosome axis that inhibits recombination. “We think that the DNA-break machines are anchored at the axis to position the breaks right within the recombination inhibiting zone. This may attract the sister chromosome loop, which remains trapped in the recombination inhibiting zone by one of the two ends flanking the break, while the second end docks off to form a search tentacle for finding the paternal chromosome.”

“We have evidence for many details of this scenario – but most importantly, the inhibition of the involvement of the sister breaks down, if the anchoring of the DNA-break machines is defective. This indicates that anchoring may be indeed a key mechanism to control the sister. The result of a sister, hyperactive for DNA-break repair in meiosis is the death or severe impairment of the developing embryo.

Funding
The published work was conducted within the framework of the Special Research Program F34-“Chromosome Dynamics” of the Austrian Science Fund FWF. Seven research groups of the MFPL and the Institute of Molecular Pathology (IMP) collaborate in this research program to unravel questions of chromosome biology. Coordination: Franz Klein and Jan Michael Peters, this year’s Wittgenstein awardee.