Autophagy: the beginning of the end

Autophagy ensures cellular health by removing harmful material from the cytoplasm. Defects in autophagy are suspected to be involved in several human diseases. During autophagy damaged or surplus material is sequestered by double membrane vesicles, called autophagosomes, which form de novo around the cargo. The factors involved in autophagosome formation are known, but how they cooperate to initiate the formation of these membranes has so far been enigmatic. In a study published in Science, the Martens lab shows how vesicles loaded with the protein Atg9 form seeds on which the autophagy machinery assembles to form the autophagosome. 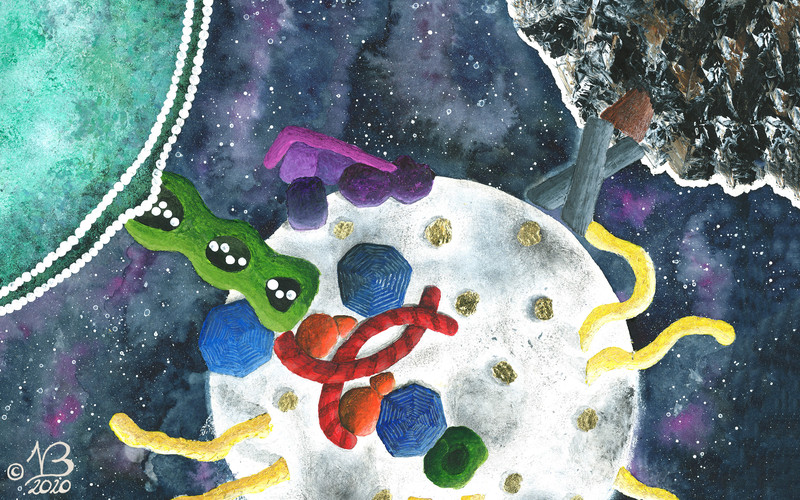 An Atg9 vesicle serves as a platform for the recruitment of the autophagic machinery. It thereby forms a seed for the formation of an autophagosome around the cargo by accepting lipids that are transferred by the Atg2 protein from the neighbouring endoplasmic reticulum (ER). (c) Verena Baumann, Max Perutz Labs

Autophagy, from the Greek for ‘self-eating’, is an essential process that isolates and recycles cellular components under conditions of stress or when resources are limited. Cargoes such as misfolded proteins or damaged organelles are captured in a double membrane-bound compartment called the autophagosome and targeted for degradation. A fundamental question concerns precisely how these “garbage bags” form in the cell. Scientists led by Sascha Martens from the Max Perutz Labs, a joint venture of the University of Vienna and the Medical University of Vienna, have now reconstructed the first steps in the formation of autophagosomes. They show that tiny vesicles loaded with the protein Atg9 act as the seed from which the autophagosome emerges. The study is published in Science.

Autophagosomes first form as cup-shaped membranes in the cell, which then grow to engulf the cellular material designated for destruction. The formation of these membranes is catalyzed by a complex machinery of proteins. “We have a very good knowledge of the factors involved in autophagosomes formation”, explains group leader Sascha Martens, “but how they come together to initiate the formation of these membranes has so far been enigmatic”.

One of the factors is Atg9, a protein whose importance in the process was known, but whose role was not clear. Atg9 is found in small intracellular vesicles. Researchers Justyna Sawa-Makarska, Verena Baumann and Nicolas Coudevylle from the Martens lab now show that they form a platform on which the autophagy machinery can assemble to build the autophagosome. “Atg9 vesicles are abundant in the cell, which means they can be rapidly recruited when autophagosomes are needed”, explains group leader Sascha Martens.

Cells encapsulate cargo in vesicles, so that they can be correctly transported and degraded in a chemical environment that is different to the one normally found in cells. Autophagosomes therefore consist of a double membrane made of phospholipids. This greasy envelope creates a waterproof package that separates material from the aqueous surroundings of the cell and marks it for degradation. However, Atg9 vesicles do not supply the bulk of the lipids to the growing autophagosome. Where does the material for this membrane then come from? The scientists have also found a possible answer to this question: “We could show that Atg9 vesicles recruit lipid transfer proteins”, says Sascha Martens. These proteins bridge the growing Atg9 vesicles to the endoplasmic reticulum (ER). In this way, lipids are transferred from the ER to the emerging autophagosome, so that it can grow in size.

To understand a complex machinery like the cell, it often helps to take it apart and rebuild it. The biogenesis of autophagosome involves numerous proteins. By isolating and characterizing 21 of these components, the scientists have been able to rebuild parts of the autophagy machinery in the ‘test tube’ – an arduous process that took Sascha Martens and his team almost ten years. “With this approach we could reconstitute the early steps of autophagosome biogenesis in a controlled manner”, he says. With the elaborate toolkit the Martens lab has developed, the scientists now aim to unravel the next steps in the biogenesis of the autophagosome. The research project was a collaboration of the Martens lab with Gerhard Hummer and Soeren von Bülow from the Max Planck Institute for Biophysics in Frankfurt and Martin Graef from the Max Planck Institute for Biology of Ageing in Cologne.