Chromosomal instability (CIN) is detrimental for cellular fitness and is a hallmark of the majority of solid tumors. How cells adjust to this instability to ensure survival is poorly understood. The lab of Christopher Campbell has now studied the long-term adaptation to CIN using yeast cells. They found that cells accumulate mutations over time that help them to alleviate the negative effects of CIN. The work is published in The EMBO Journal. 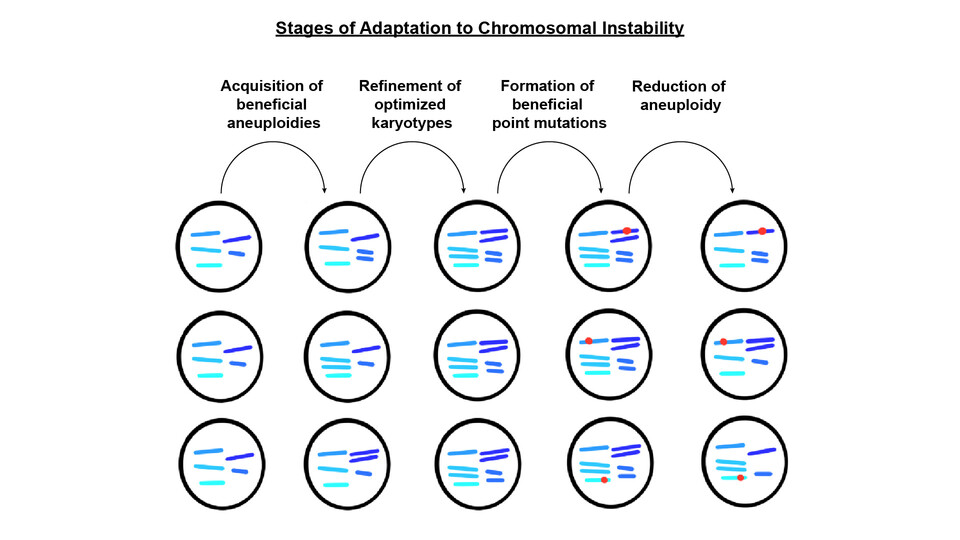 Cell division is a delicate process in which chromosomes are copied, segregated, and distributed to daughter cells. Errors in the process can lead to chromosomal instability and abnormal numbers of chromosomes, a state called aneuploidy. Chromosomal instability is associated with poor cellular fitness, however, there is one type of cell that seems to be unfazed by it: “Cancers are highly paradoxical, in the sense that they are defined by uncontrolled cellular growth, yet both chromosomal instability and aneuploidy are found in almost 90% of solid tumors”, explains group leader Christopher Campbell. Scientists have long realized that cells must find ways to adapt to this chromosomal chaos. How, exactly, has been at the center of research in the Campbell lab. Previously, the scientists elucidated some of the early survival strategies of cells. Now, they reveal how cells adapt over longer periods of time.

To understand the basic principles of adaptation, the scientists utilized yeast cells. Yeast cells are easy to culture in the lab and allowed the researchers to study adaptation to chromosomal instabilities over hundreds of generations in just a couple of months. With its smaller genome compared to human cells, the team could also sequence hundreds of populations of these cells to identify beneficial mutational patterns that are acquired over time. They were now able to build the first timeline of how cells adapt to chromosomal instabilities. First, the cells acquire specific aneuploidies that are beneficial. “These are extra chromosomes that contain genes that, when overexpressed from an additional copy, provide beneficial effects”, explains Chris Campbell. Over time, they acquire an optimal karyotype, with extra copies of specific sets of chromosomes that they benefit from the most. In the final step, cells acquire specific mutations that increase their fitness, which, in turn, allows for a reduction in aneuploidy in the entire population over time. This step-wise time line for adaptation could help explain the survival of cancer cells with high levels of chromosomal instability.

The next phase of research in the Campbell Lab will address whether these adaptive mechanisms are also employed in more complex human cancer cells. One specific group of beneficial mutations has caught the eye of the scientists. Mutations in the SCF complex, which is essential for cell cycle control, can improve the survival of chromosomally unstable cells. “The SCF complex is known to be involved in the entry into the cell cycle but not in chromosome segregation. It was surprising to see that these mutations can rescue otherwise detrimental chromosome mis-segregation phenotypes”, says Christopher Campbell. “A major question we will address in the future is how this works mechanistically”.